Now on the Menu at Mukbang Shows Restaurant in Abu Dhabi is Rabokki. If you're in the mood for some delicious, traditional Korean food, look no further than Rabokki. This dish is made with Tteokbokki rice cake tubes and cheese, and it's both savory and sweet. Be sure to try Rabokki at Mukbang Abu Dhabi.

When it comes to traditional Korean food, there are a few classics that always come to mind. With its a sweet and savory taste, Rabokki is one of those dishes that's always enjoyable. And while some people might choose to eat it plain, adding cheese makes it even better! So if you're looking for a tasty new way to enjoy rabokki, give this version a try. You won't be disappointed. Eomuk guk, also known as "fish cake soup,". Eomuk Guk is a traditional Korean dish made with eomuk, a type of fish cake that is often used in Korean cuisine. Eomuk is made by grinding white fish and shaping it into thin, rectangular cakes. The cakes are then steamed or fried and are often used as a side dish or an ingredient in soups and stews.

Eomuk guk is a simple but flavorful soup that is made by boiling eomuk in a broth made from anchovy and kelp. The broth is typically seasoned with soy sauce, salt, and a small amount of sugar. Some version of the broth also adding chopped vegetables. Such as scallions, carrots, and cabbage.

This soup is often enjoyed as a light and comforting meal, and is often served with a bowl of rice. It is also considered a comfort food by many Koreans.

Eomuk guk is often served as street food, at food stands and casual restaurants. The fish cakes are usually cut into small pieces. The soup is then topped with scallions and sliced chili peppers.

Eomuk is not only a common menu item in traditional Korean meals. It is also served in various forms at special events such as weddings. It can be a side dish or as an ingredient in different dishes too

be used in many different types of dishes, such as soups, stews, stir-fries. It can even as a topping for bibimbap (a Korean mixed rice dish).

Also being used in soups like eomuk guk, eomuk can also be served as a side dish. Often being pan-fried with a bit of oil or served in a light broth. It's a popular snack, often sold by street vendors and can be found at various Korean festivals.

The nutritional value, eomuk is relatively low in calories, and is a good source of protein. Yet, it is important to note that it is also relatively high in sodium and may contain MSG. Depending on how it is prepared.

Eomuk is also considered a comfort food in Korea. It's a traditional and popular dish that can be enjoyed by all ages, and is a great way to experience Korean cuisine. It's also easy to find in any Korean grocery store.

In summary, eomuk guk is a traditional Korean soup made with eomuk. A type of fish cake that is often used in Korean cuisine. It's a simple but flavorful soup that is enjoyed as a comfort food. It can be found in many street food stands and restaurants. Eomuk is also versatile ingredient . It can be used in many different types of dishes, as well as being a popular side dish or snack. 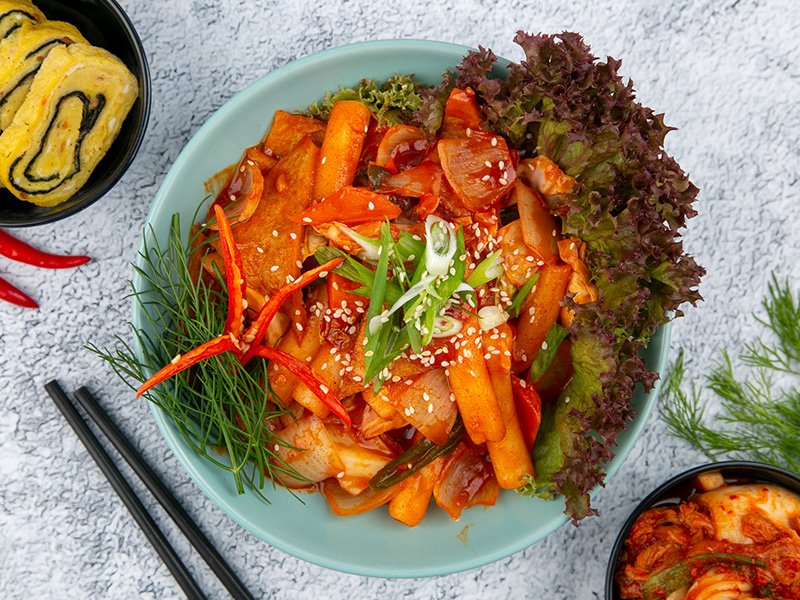 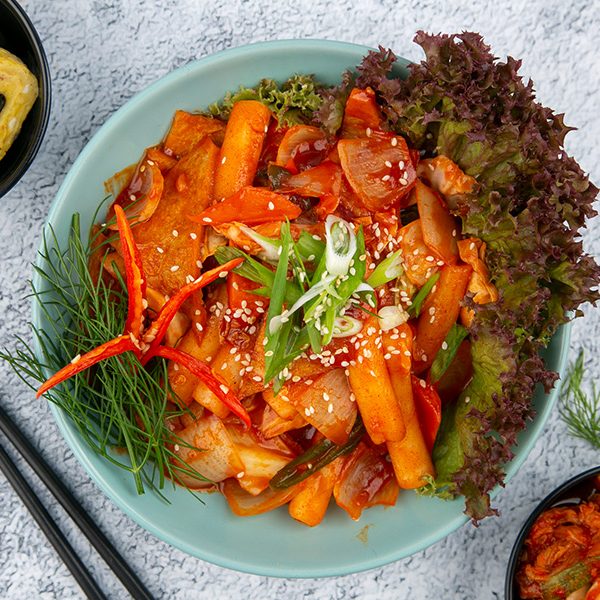 42 AED
Tteokbokki, also known as Korean spicy rice cakes, is a popular Korean street food. Made from soft rice cakes, fish cake, and a spicy gochujang sauce. Tteokbokki is a delicious and satisfying dish. A dish that is perfect for those looking for a spicy and comforting meal.
The rice cakes used in tteokbokki are made from glutinous rice flour. And are known for their chewy texture. The spicy gochujang sauce, made from chili pepper powder. This is what gives tteokbokki its signature fiery kick. Fish cakes, which are made from ground fish and other ingredients. Are also added to the dish for added flavor and texture.
Tteokbokki is typically served as a snack or street food, but it can also be enjoyed as a main dish. It is often served with additional toppings. Such as boiled eggs, scallions, and sesame seeds. Tteokbokki is also a popular dish at Korean restaurants. Tteokbokki is often served with a side of kimchi to balance out the spiciness.
Tteokbokki is a vegan-friendly dish. It can be made with different types of protein such as tofu and vegetables to make it a more complete meal.
It is a perfect dish for those who love spicy food and want to try something new and unique. Tteokbokki is also a great dish for those who are looking for a quick and easy meal that is packed with flavor. 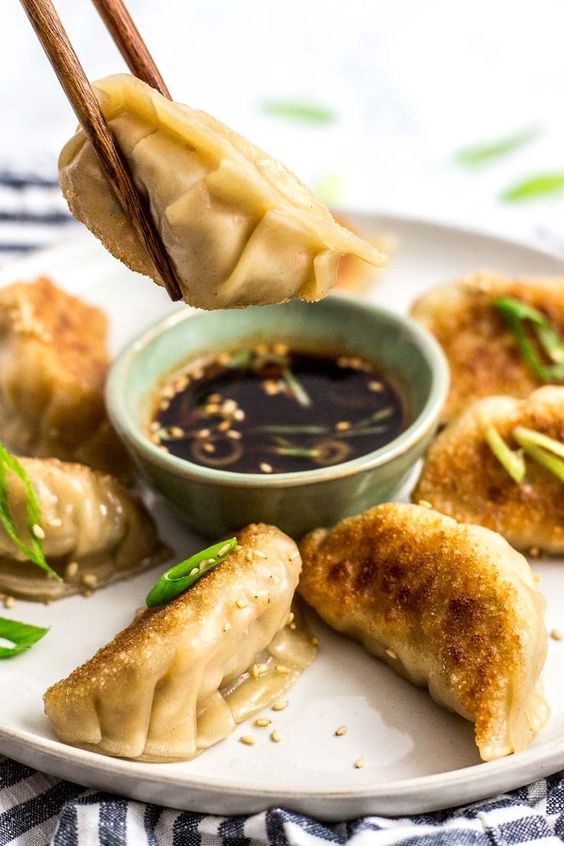 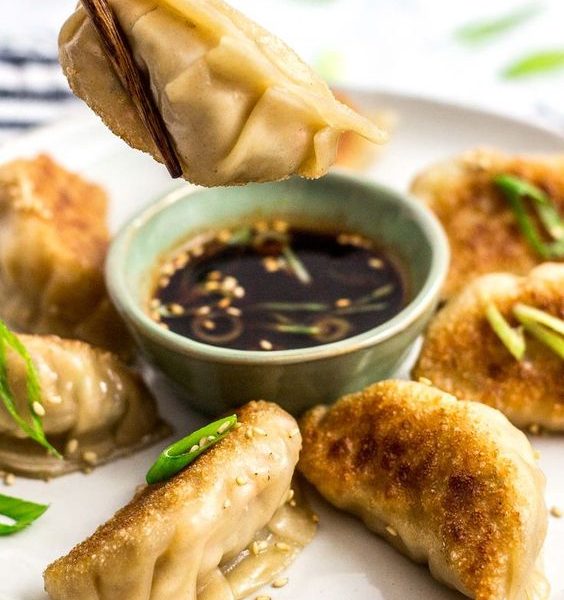 Mukbang Shows Restaurant in Abu Dhabi. Is proud to offer our customers the satisfying experience of Mandu. a traditional Korean dumpling dish. These dumplings are made with a combination of finely-ground meats. Such as beef or chicken and a mixture of vegetables such as cabbage, onion, and scallions. The filling wrapped in a thin and delicate dough. Which is then steamed or pan-fried to perfection.

One of the key features of our Mandu is that we use only the freshest and highest-quality ingredients. Sourced locally and internationally. Our Mandu are made with care and attention to detail. Ensuring that each dumpling is packed with flavor and texture. The savory filling with a nice crunch from the vegetables. And the subtle chewiness of the dumpling skin make for an enjoyable experience.

Another great aspect of our Mandu is the versatility in preparation. They can be steamed, pan-fried or even deep-fried to create a crispy texture. Giving you the option to enjoy them in different ways. They are also great for sharing, making it a perfect dish for social gatherings or parties.

At Mukbang Shows Restaurant in Abu Dhabi, we also offers a variety of dipping sauces. Sauces to complement the flavors of the Mandu, such as soy sauce, vinegar and chili oil. These sauces will add an extra layer of flavor to your experience. Allowing you to customize the dish to your liking.

In summary, Mandu at Mukbang Shows Restaurant in Abu Dhabi is a must-try dish. A Must try for those looking to experience traditional Korean cuisine. Made with only the freshest and highest-quality ingredients. Our Mandu packed with flavor and texture. Versatile in preparation and great for sharing, it's the perfect dish for any occasion. Visit us at our restaurant and try our delicious Mandu, along with other Korean dishes.

At Mukbang Shows Restaurant in Abu Dhabi, we also make sure that our Mandu is authentically made. With a traditional recipe that has been passed down through generations. This ensures that each dumpling is made with the same care. Same precision that has made this dish a staple in Korean cuisine.

We also take great care in presentation. Our Mandu arranged on plates and make for a great visual experience. It's not only a meal, but it's an artful culinary experience that you won't find elsewhere in Abu Dhabi.

We have a vibrant and welcoming atmosphere at our restaurant. It's a perfect spot for a date night, a family dinner or a casual hangout with friends. Our friendly staff is always ready to assist and make sure you have a great dining experience.

In summary, Mukbang Shows Restaurant in Abu Dhabi offers a authentic. Traditional and delicious Mandu. Korean dumplings dish, made with only the freshest and highest-quality ingredients. Packed with flavor and texture, healthy and versatile. With options for vegans and vegetarians. authentically made, presented beautifully, and served in a warm and welcoming atmosphere. It's a must-try for anyone looking for a unique and satisfying dining experience. Now on the Menu at Mukbang Shows Restaurant in Abu Dhabi is a new item called Gimmari. Gimmari is a popular Korean fried snack that's made with seasoned glass noodles wrapped in seaweed, then deep-fried.

Gimmari are a type of deep-fried seaweed spring roll that is popular in Korea. They are often served with TTEOKBOKKI, a type of spicy rice cake. The two dishes are often eaten together, as they are both considered to be street food. Gimmari are made by wrapping seaweed around a filling, such as vegetables or seafood. The rolls are then deep-fried until they are golden brown. TTEOKBOKKI is made by steaming rice cakes and then coating them in a spicy sauce. It is typically served with boiled eggs and vegetables. When Gimmari Seaweed Rolls and TTEOKBOKKI are eaten together, they make for a hearty and filling meal. Don't forget to try our Gimbap Korean Seaweed Rolls also. Dynamite shrimp is a dish that is one of our favorites at Mukbang Shows Restaurant in Abu Dhabi. . Whether you are eat it as an appetizer or the main course, dynamite shrimp will always be a hit.  Dynamite Shrimp is made with battered fried shrimp that is coated in a spicy mayo sauce. This combination of flavors is sure to please everyone at your table. And, dynamite shrimp is not only delicious, but it is also easy to make. So, if you are looking for a dish that will impress your friends and be easy on your budget, dynamite shrimp is the perfect recipe for you.

Try it with Korean Fried Chicken 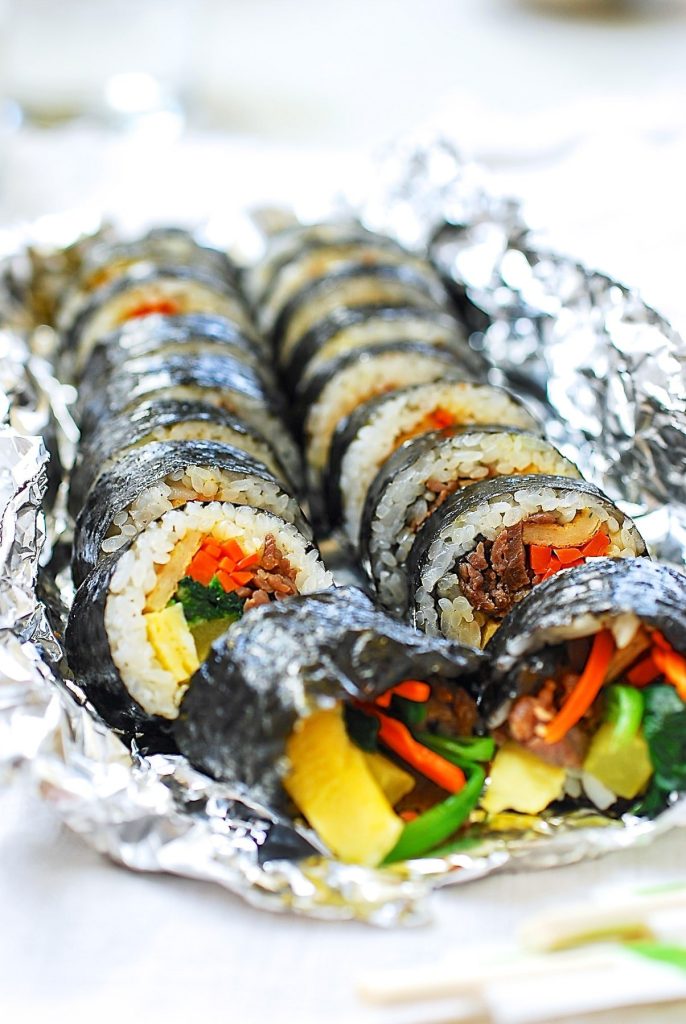 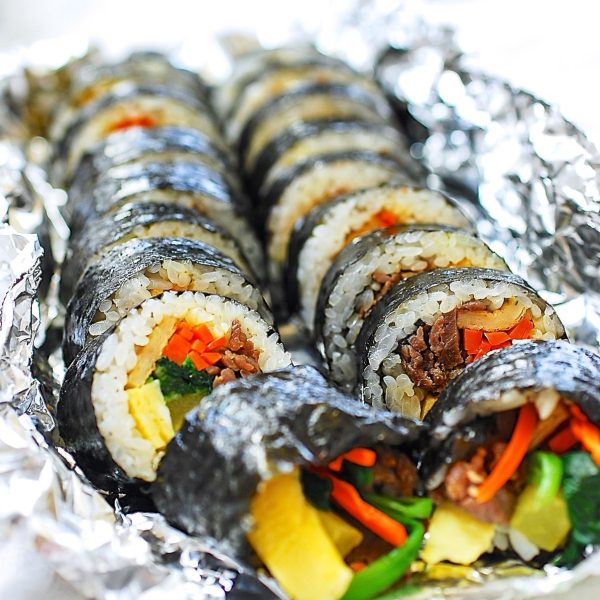 32 AED
Gimbap is a delicious Korean dish that consists of steamed white rice. It also contains and various fillings, rolled in seaweed. Gimbap also known as Kimbap  is a popular meal among Koreans and is often eaten as a quick snack or light meal. Gimbap comes with any number of fillings. Gimbap includes vegetables such as cucumber, carrot, and radish, as well as spam or other meat. The Kimbap is then cut into bite-sized pieces and served with soy sauce for Kimbap dipping.
Gimbap is a healthy and delicious alternative to traditional fast food options.  Gimbap is perfect for those who are looking for a quick and easy meal that bursting with flavor.  Kimbap With its variety of fillings, Korean Rolls offers something for everyone. So if you're in the mood for a tasty and nutritious meal. then look no further than gimbap also known at Kimbap and Korean Rolls

Goes perfect with our Korean Pancakes 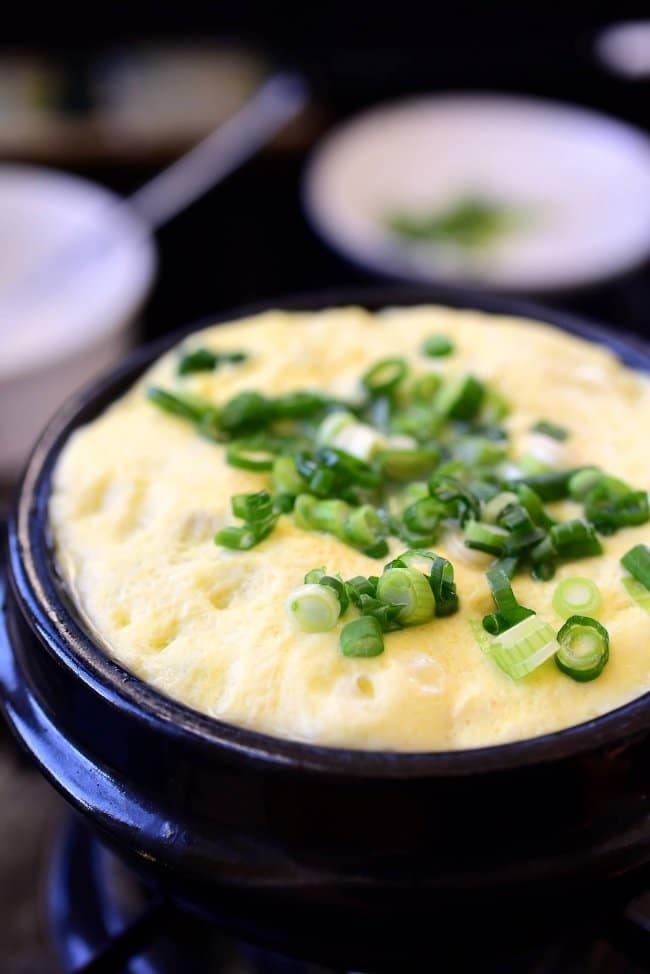 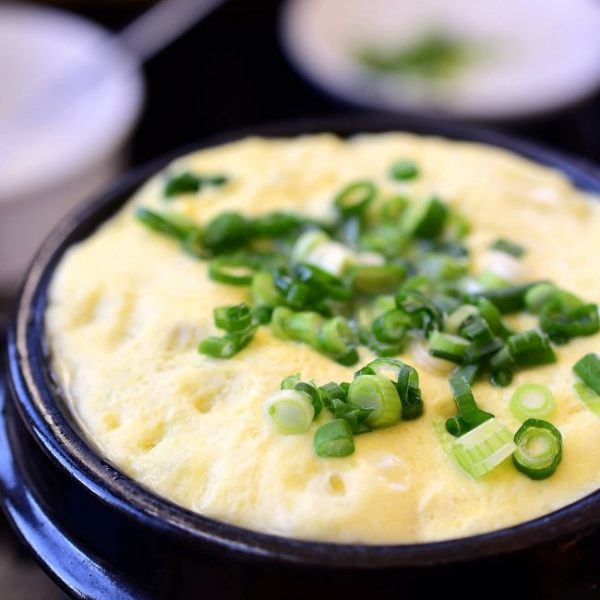 Gyeranjjim is a popular Korean dish made by steaming eggs.  Fresh on the Menu of Mukbang Shows Restaurant in Abu Dhabi. The eggs are mixed with vegetables, meat, and spices, and then steamed for a soft and fluffy texture. Gyeranjjim is often served as a side dish or main course, and can be made in different flavors depending on the ingredients used. 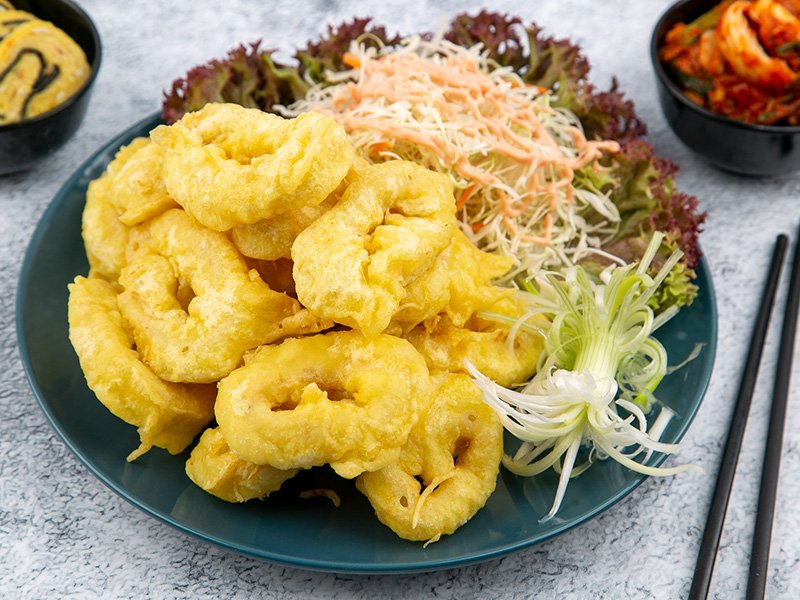 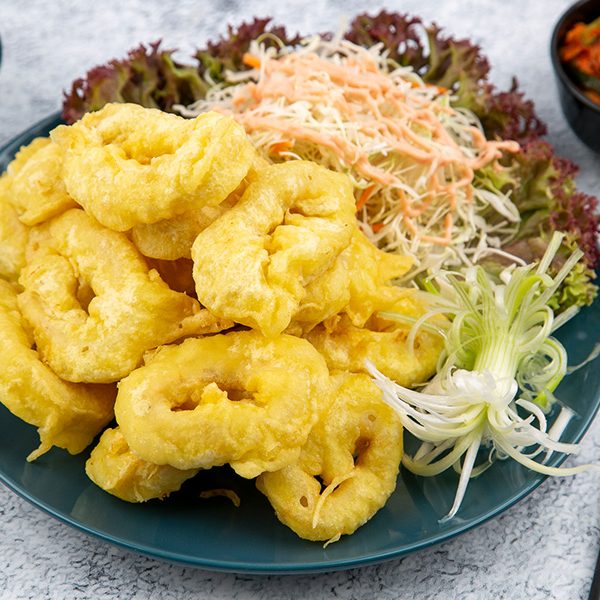 Looking for the best Fried Calamari in Abu Dhabi? Look no further than ours! Our delicious Fried Calamari is made with only the freshest ingredients and cooked to perfection.

This dish is a true seafood lover's delight. Tender calamari rings are fried to golden perfection and served with our delicious house Mukbang sauce. You'll love our take on this classic seafood dish!

Fried calamari is one of the most popular seafood dishes out there. And for good reason - it's absolutely delicious! . At Mukbang Shows Restaurant is made with only the freshest, highest-quality ingredients.

Our fried calamari is perfect for any occasion. Whether you're looking for an appetizer to share with friends or a main course for your next seafood feast, our dish will surely impress. Our team of expert chefs are passionate about providing an unforgettable dining experience, so you can be sure that you're getting the absolute best fried calamari when you order from us.

What are you waiting for? Come check it out today! You won't be disappointed. 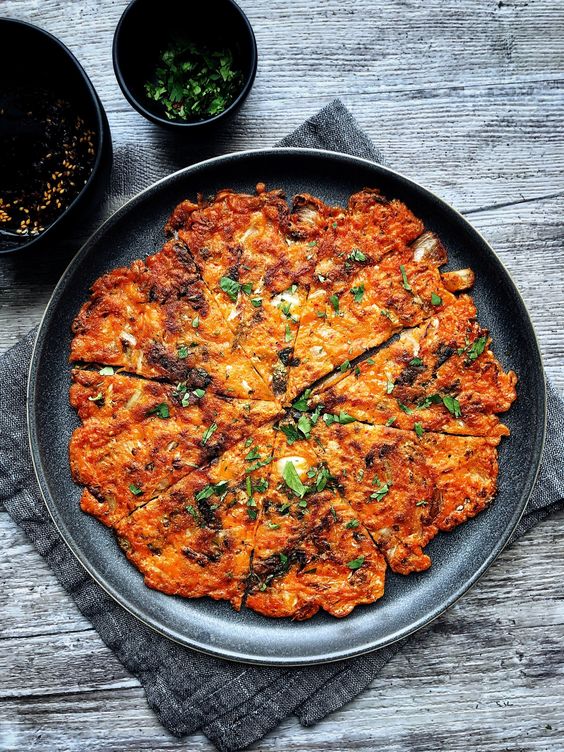 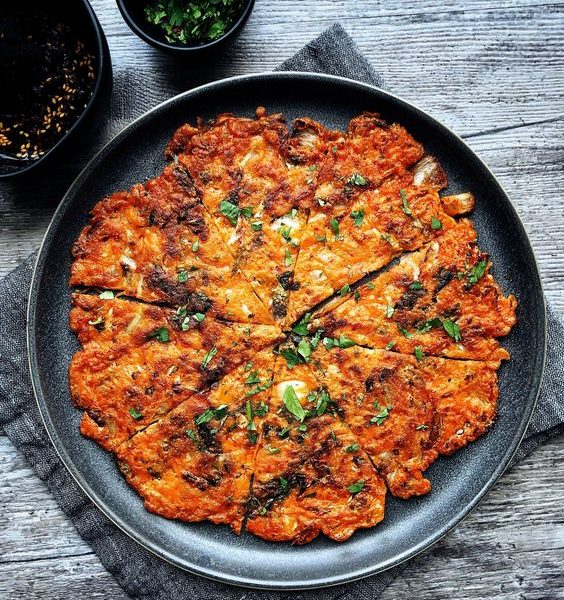